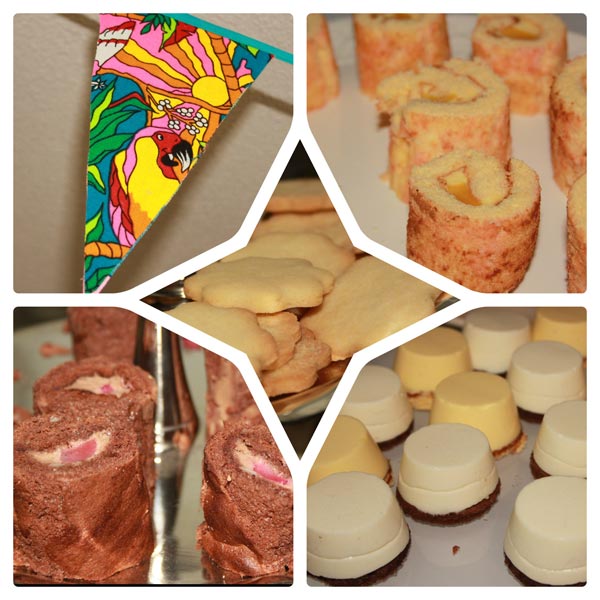 Did you know that I have a cousin that just graduated and is now a Master of Science, Social Psychology? I probably never even mentioned I had a cousin, right? Well, now you know!

And because she has graduated she decided to throw a party. Guess who was in charge of the sweet stuff, yep, that’s me. Her theme of the day was Buddha and sushi with a tropical twist. She’s a Caribbean girl with a passion for yoga. Check out her website on http://www.thisyogalifeofmine.com

Thinking of tropical I decided to make two types of bavarois, a mango and passion fruit bavarois and a coconut bavarois with a chocolate filling (a cremeux). Next to the mini bavarois I also made little rolls, one filled with some of the mangos and passion fruit bavarois I stil had left and another one filled with chocolate and strawberries. The rolls were one of my sweet versions of sushi. I also threw a few sugar and cinnamon muffins and brownies in the mix and baked a few cute cookies. I also tried making some sweet sushi, but even though it looked nice, it wasn’t really to my taste a few people did want me to serve it, so I did, but I don’t think I’ll be serving it again, it needs more tweaking.

Next to all of my sweet stuff there was some real sushi (made by her sister), noodles, petjil (which is veggies with peanut sauce, a typical dish from Surinam), spring rolls, chicken teriyaki, fruit bowl and lots of drinks.
All in all enough food for everyone plus more!
Having more than enough food is typical for my family though, there’s not a party I go to and where I don’t leave with a doggie bag :).

My cousin has some really nice and fun friends, combine those with our fun family and you’ve got a nice party on your hands! The main thing though was that my cousin had a great time and so she did!