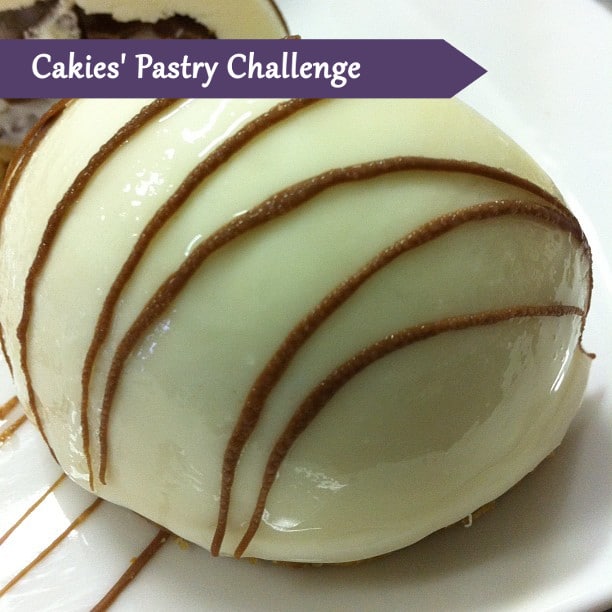 Last Monday we were making bavarois (bavarian cream) again. We were making two kinds this time, a coconut and a champagne bavarois. For the end result we had to plate up the desserts.

As always we had to work in pairs. Because a lot of things need to go into the freezer and the oven you almost always start making two recipes at the same time.

We started with the “interiors” of the dessert. The interiors are the filling of the bavarois. When you cut through the bavarois you can see that there is more hidden inside. For the coconut dessert we had a filling of coconut covered in chocolate, basically a type of Bounty. That’s also why the coconut dessert was named “Mutiny on the Bounty” :). For the champagne dessert we had an apricot filling.

We started out really well and were on schedule, but we did have to keep pushing. We really took our time with making the dessert this time, we were one of the last to finish. We were really happy with the result though. The only thing we might change next time is the mold we used for the champagne bavarois. We would pick a mold out of which we could cut slightly thicker pieces. The piece we cut now was too thin and cutting a wider piece using the lines of the mold would result in a piece that was too thick. Because the slice we had now was too thin it wasn’t able to stand upright for our presentation so we had to lay it down. It still looked nice though! Having the dessert stand up would just make it a little nicer 🙂

We plated up the dessert on a long plate and added a little extra of the apricot filling and some rolled up sponge. It looked really nice!

Personally, I really liked the way we plated the coconut dessert the most. We kept it really simple. We used a small plate and added some chocolate stripes on it, put the coconut dessert on top which also had similar stripes. Neat and simple, just the way I like it!

We were told that our desserts could easily be served in a restaurant. Always nice to hear! It makes all the hard work worth while!