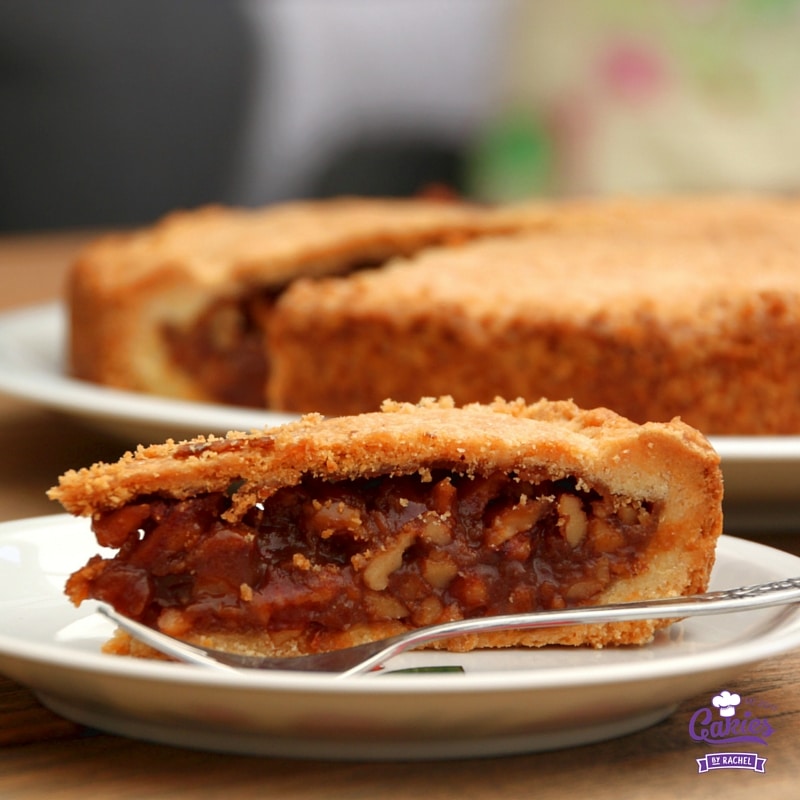 I took this Engadiner Nusstorte to a party recently and every single person that tasted a piece came back for seconds (seriously, I’m not lying here). This Swiss nut tart is filled with walnuts covered in a thick caramel sauce. I made this recipe for my “Baking Around the World” challenge.

According to Wikipedia Engadiner Nusstorte (also known as Büdner Nusstorte) originally comes from Graubünden in Switzerland. It’s a traditional tart filled with a caramel and nut filling. Generally walnuts are used for the filling but sometimes, though very rarely, other nuts are used. The tart was invented in the 1920’s. There are several theories on how the original recipe for this Nusstorte was developed, but I suggest you check out Wikipedia for more information about that. I can’t be bothered going into the details. I just want to get on with the recipe! First we need to make our dough, for that we’ll need flour, sugar, butter, an egg, a pinch of salt and some lemon zest. Add flour in a bowl. The sugar and a pinch of salt. Take two knives and cut till you get a crumbly dough mixture. When the dough is crumble, use your hands to knead it together and form a ball. Cover with clingfilm and put in the fridge to chill. Next take your ingredients for the filling: double cream, walnuts, sugar, honey and water. The egg looks nice on the photo but it’s not used in the filling at all, it kinda snuck in while I wasn’t looking… You’ll need it later though, so hang on to it. Take a saucepan and add the sugar. Bring to a boil and stir occasionally, until the sugar turns a light golden brown color. When the mixture is golden brown, add in the walnuts and give it a short stir. You’ll end up with a nice dark, thick caramel. Make sure you don’t let the caramel burn, keep an eye on it at all times. When the caramel reaches a nice dark golden brown, thick consistency, take it off the heat and leave to cool. Pour in your cooled down, thick walnut caramel mixture Take the remaining dough and roll out at the size of your springform. Now here’s where you have to be careful and transfer the dough on your tart, make sure you cover all of the filling. Or if you’re like me, you let the dough slip and fall at the wrong spot and are screwed. It’s not really possible to pick up the dough from the caramel and move it (trust me, I tried…). The good news though is that you can patch things up with some dough. You can see the patchwork I did. However, if you did things right, you can now fold over the sides of the dough onto your cover and using a fork go all along the outside and lightly press it so the edges will seal. Using your fork, also make small holes all along the top of the tart. Brush with the egg we didn’t use for the filling, lightly whisk the egg and brush the entire tart. Put the tart into the oven. And there you have it, a beautiful, in my case rustic looking, Engadiner Nusstorte. Slice a small piece and just look at that delicious, melt in your mouth, caramel filling.

Okay, I’m not going to lie to you, you’ve seen what goes into the tart. This isn’t a diet friendly recipe, it’s calorie rich but sometimes you just have to indulge into something and Engadiner Nusstorte can be just the thing you’re craving. Eat it, enjoy it, just take it easy on the portion size. The tart can keep covered in aluminum foil up to a week. Plenty of time for you to nibble on a little bit every day. 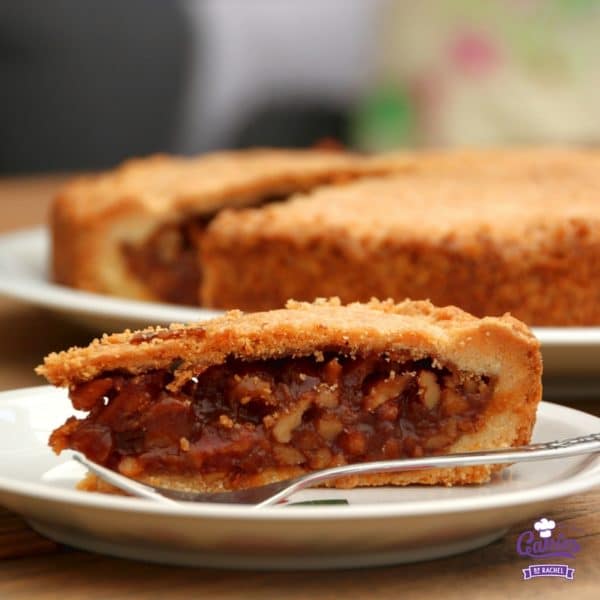