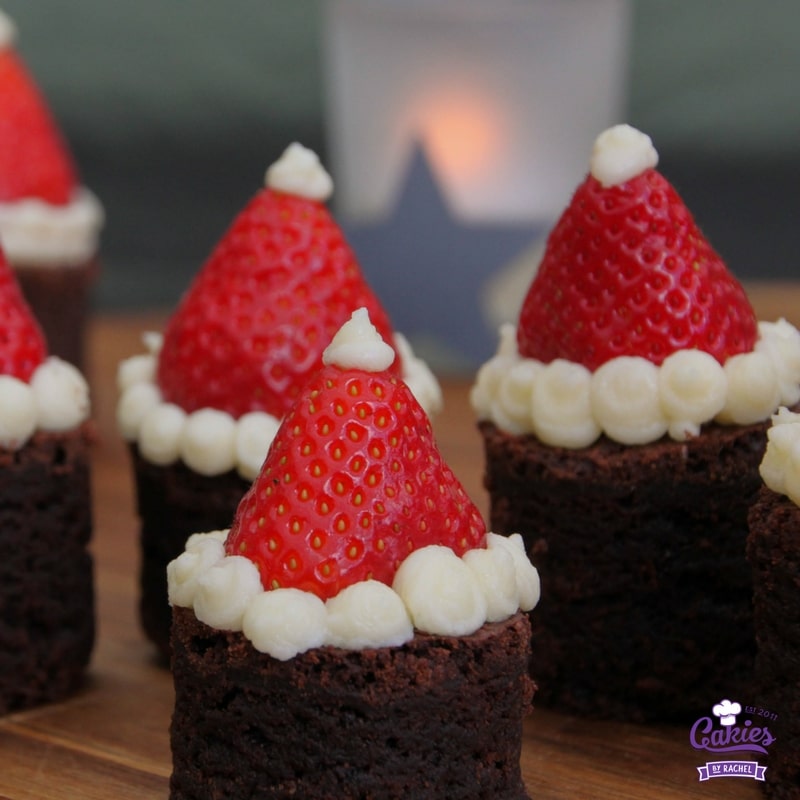 I’ve been wanting to write about these Santa Hat Brownies ever since I saw them online somewhere (I can’t remember where exactly) years ago.   They’re really simple to make, you take a brownie, stick a strawberry on top, decorate the strawberry so it looks like a Santa Hat, and there you have it, a Santa Hat Brownie 🙂

I can barely call this a recipe, but since it involves the assembling of food, I’m putting this in my recipe section. I’ve no idea what the person used to decorate the strawberries, but I’ve used white chocolate ganache, buttercream and royal icing, all work well. I’ve also made these on miniature cupcakes which look cute as well. But because for me the brownie version are sort of the ‘original’ ones, I’ve decided to share my version of the Santa Hat Brownies (thank you to whoever came up with the idea first!)

All you need for this ‘recipe’ is brownies, strawberries (stem removed) and some kind of topping in a piping bag like a chocolate ganache, buttercream, whipped cream or royal icing. Or any kind that will be firm enough to keep it’s shape after piping. Start by cutting your brownies. You can use squares, but I like to cut them out with a round cutter to go with the Santa Hat. Make sure you have enough space to be able to put a strawberry on top and decorate on the side of the strawberry. I piped dots all around the strawberry in this case but you can make the rim of the Santa Hat brownie any shape you like, as long as it still represents a Santa Hat. The little dot of icing on the top finishes the whole thing off and really makes them look like little Santa Hats.

Not only do they look good, the Santa Hat brownies also taste delicious!

For these Santa Hat brownies I used my Bad, Bad Brownies recipe as well as some of my Classic Buttercream. But you can use any brownie or mini cupcake with an icing of your choice. I used roughly half a batch of my classic buttercream, but it all depends on how much icing you use to decorate your brownies. This is such an easy and fun snack to make for Christmas, I suggest you try it out and have some fun.

Don’t forget to show me your beautiful creations on social media #bakecakies. 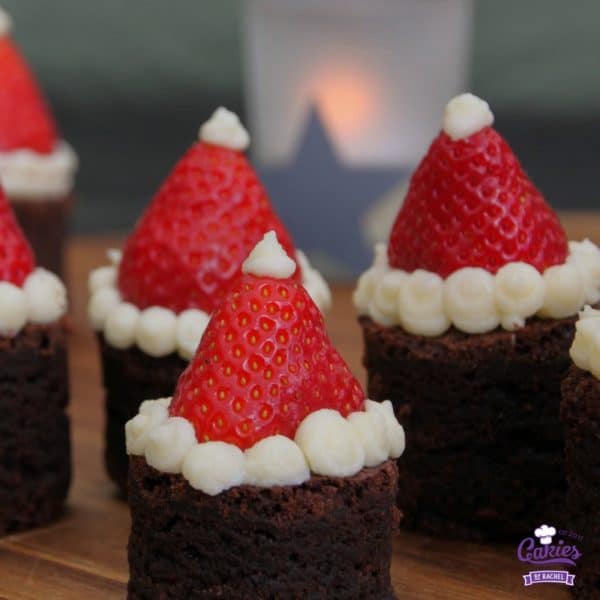