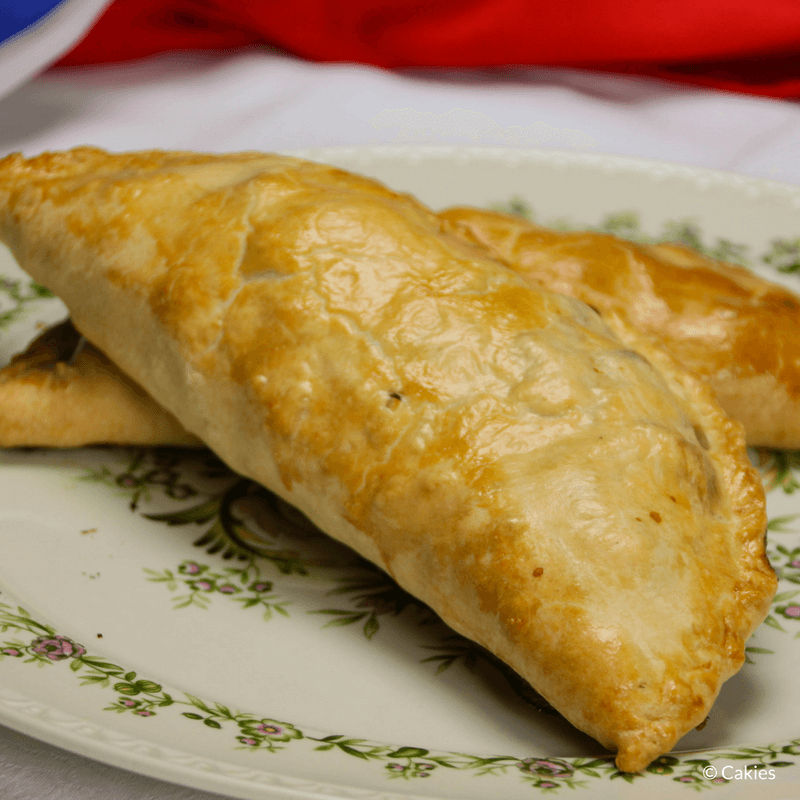 The Cornish Pasty is a traditional English pasty and considered the national dish of Cornwall. It’s a hand pie filled with beef, potato, swede (rutabaga) and onion.

Traditionally a beef skirt cut is used for Cornish pasty. However if, like me, you can’t find beef skirt, try to find another nice cut of beef that will cook in the same amount of time as the raw vegetables. The cut of beef I used didn’t generate enough juice to my liking to create a nice gravy, but it still tasted really nice. I would however recommend to try and find a beef skirt for the Cornish pasty.

Next to beef, a Cornish pasty also contains firm potatoes that will hold their shape as well as onions and swede. Season generously with salt and pepper and that’s all the filling you’ll need. Very simple, 4 ingredients wrapped in a shortcrust pastry. I slightly adapted a recipe from the Cornish Pasty Association to make my own Cornish pasty.

I set out to make Cornish pasties for my “Baking My Way Around The World” challenge. This is the dish I’m linking to the United Kingdom in my challenge.

The most difficult part for me when making the pasties was to crimp the edges of the pastry. I’m going to have to practice that some more. Cause it’s the crimping that really makes the Cornish pasty a proper Cornish pasty in my opinion.

How To Make Cornish Pasty For the dough you’ll need strong white bread flour, butter (the original recipe called for part butter, part lard, but I only had butter available), salt and a little bit of water. For the filling you’ll need beef, potatoes, onions and swede, all cut in and diced in roughly the same size.

Make sure yo use a swede by the way, I had to look it up, cause some recipes I found also mentioned turnip and the two aren’t exactly the same, but I found out that traditionally swede is used so that’s what I used as well. Swede is also called rutabaga or neep. First, in a mixer, or by hand, combine flour, salt and butter and mix until crumbly. Once crumbly, slowly add the cold water and knead until your dough is elastic. Cover the dough in clingfilm and leave to rest in the fridge for 3 hours. When the 3 hours are up it’s time to roll out and cut the dough into circles of  approximately 8 inches / 20 cm. A nice tip given by the Cornish Pasty Association was to use a side plate as a guide. It worked perfectly for me. Next, I layered the filling onto one half of the dough. I made sure the beef was on top so all the juices would drip down into the vegetables at the bottom. Also make sure you season it well with salt and pepper, the first pasty I made I didn’t season much and it turned out a bit bland. So be sure to season it generously. Fold over the pasty to close it and crimp the edges. If needed brush some water on the edges of the dough to help it stick together. As you can see, my crimped edges aren’t too pretty, but I was happy with them for a first try. Put the pasties on a baking sheet lined with parchment paper, lightly whisk an egg and brush the pasties. Bake in the oven until golden. These came fresh out of the oven and smelled delicious. This is what it looked like on the inside. It may not look much, but I really enjoyed them. I love simple ingredients, simple flavors. Delicious!

Print
Cornish Pasty
The Cornish Pasty is a traditional English pasty and considered the national dish of Cornwall. It's a hand pie filled with beef, potato, swede (rutabaga) and onion. 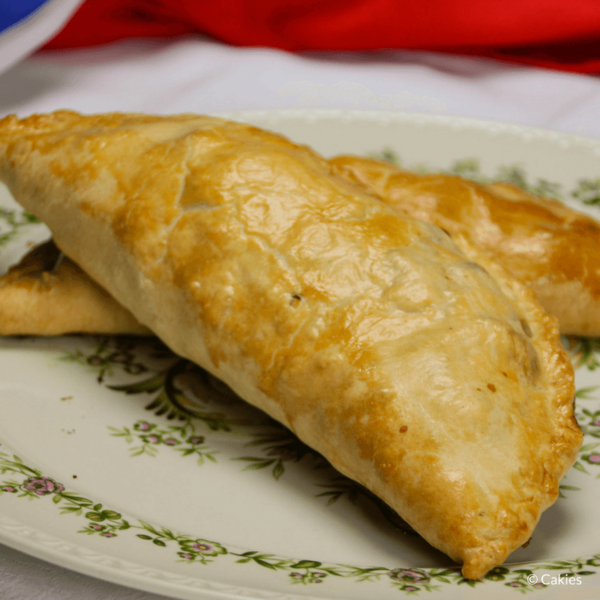